Purchase and renovation of a 135-year-old single-family house

In this success story, we report, how customers approached the purchase of a single-family home without any significant documentation and immensely accelerated the whole process of financing. And they did it at an attractive price!

In 2020, a single-family house from 1885 in need of renovation was offered for sale. The house is located in a quiet village with less than 2,000 inhabitants in the rural area of northern Germany. The prospective buyers had the plan to convert it as a comfortable vacation house since it is very idyllically convenient and one can see from the living room even in the distance the river Elbe. Already when looking at the real estate ad, the young couple fell in love with the great house.

The first viewing was quickly arranged with the current owners. From the outside, the 2-story red brick house left a great first impression. During the interior inspection, it quickly became apparent that some things would have to be adapted to today's needs and requirements. The seller informed already during the inspection, that unfortunately only very few to partly no or maximally outdated documents to the building are present. So there is no documentation of the generous roof extension. Likewise, the views and cuts from the year of construction no longer correspond to the current conditions. After consultation with the responsible building authority locally the buyers experienced, that there are unfortunately no documents for such an old building. At least it could be clarified in the conversation that it is not a listed building.

The buyers expected renovation costs of € 145,000, plus the purchase price of € 85,000. The young couple wanted to finance a large part through a bank by means of a real estate loan.

However, since banks require up-to-date and detailed documents for the evaluation and assessment of a property, it quickly became clear that the available documents would not be sufficient.

After discussions with several architects from the region, all of whom would prepare the documents, it became clear, also in view of the already high renovation costs, that all in all it would probably be too expensive.

On the search for alternatives the potential real estate buyers became attentive on the homepage of Grundriss Schmiede. The decision was quickly made to have the necessary documents drawn up by ourselves and by us.

After a short telephone briefing by the Grundriss Schmiede the buyers - equipped with pen, paper, folding rule and laser range finder - drove again into the selected single family house. Once there, they made a hand-drawn sketch of the first floor and the upper floor and used a folding rule and laser range finder to transfer the current meter readings to their sketch. 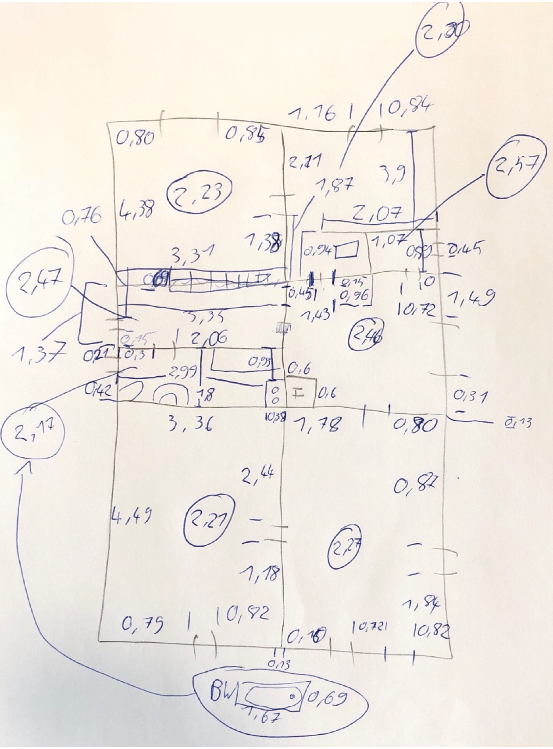 The young couple uploaded this sketch to their customer account at Grundriss Schmiede and booked two dimensioned floor plans with floor space layout and architect's verification.

After only 24 hours, they received the current and dimensioned floor plans back for forwarding to the banks. 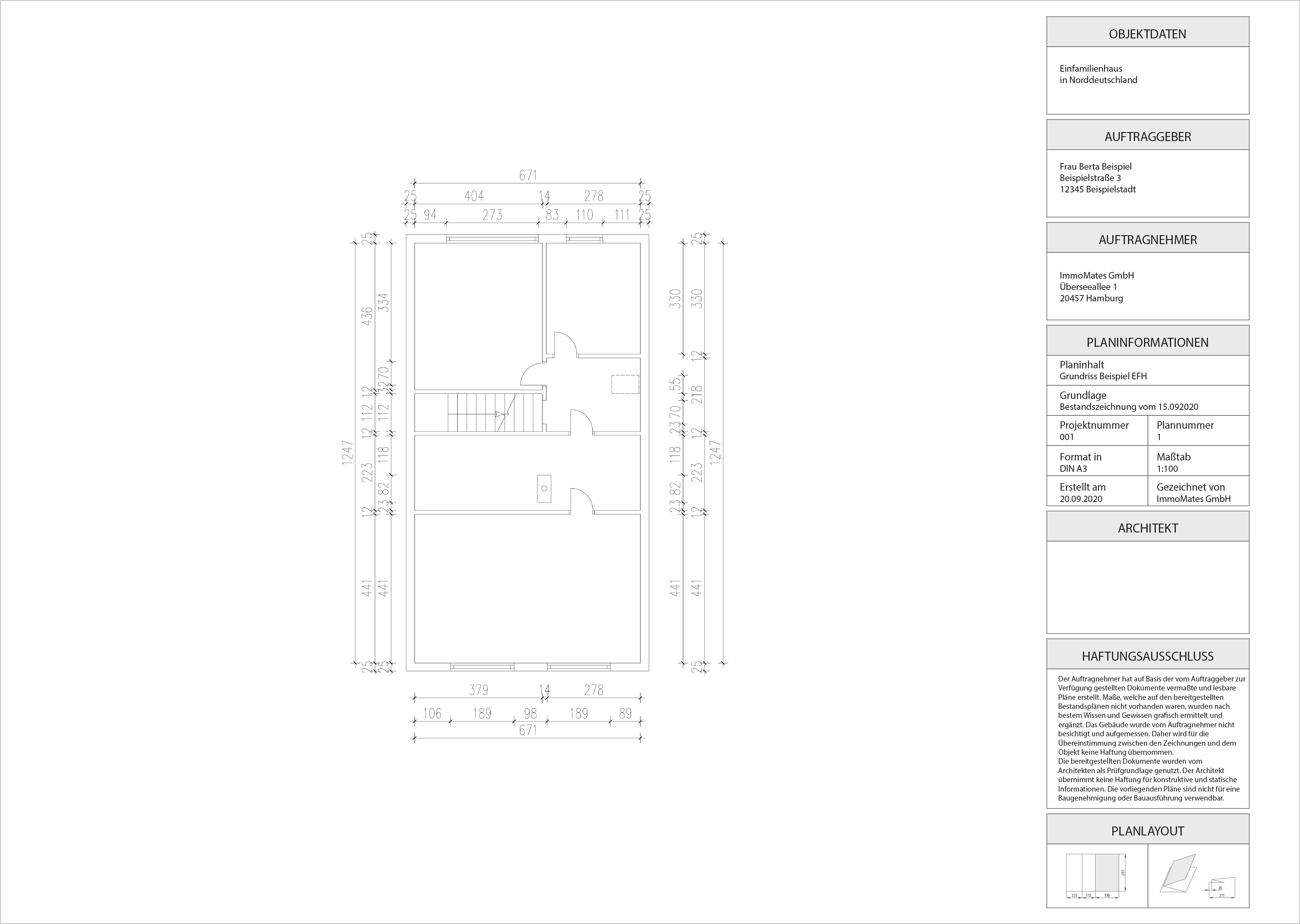 In addition to the two dimensioned floor plans, the buyers also wanted to recreate the cuts and views.This was also immediately implemented by Grundriss Schmiede.

Here, the original documents were used and adapted to the current conditions. Thus, over the years, some windows on the first floor and upper floor were added, which were not yet included on the original plans. 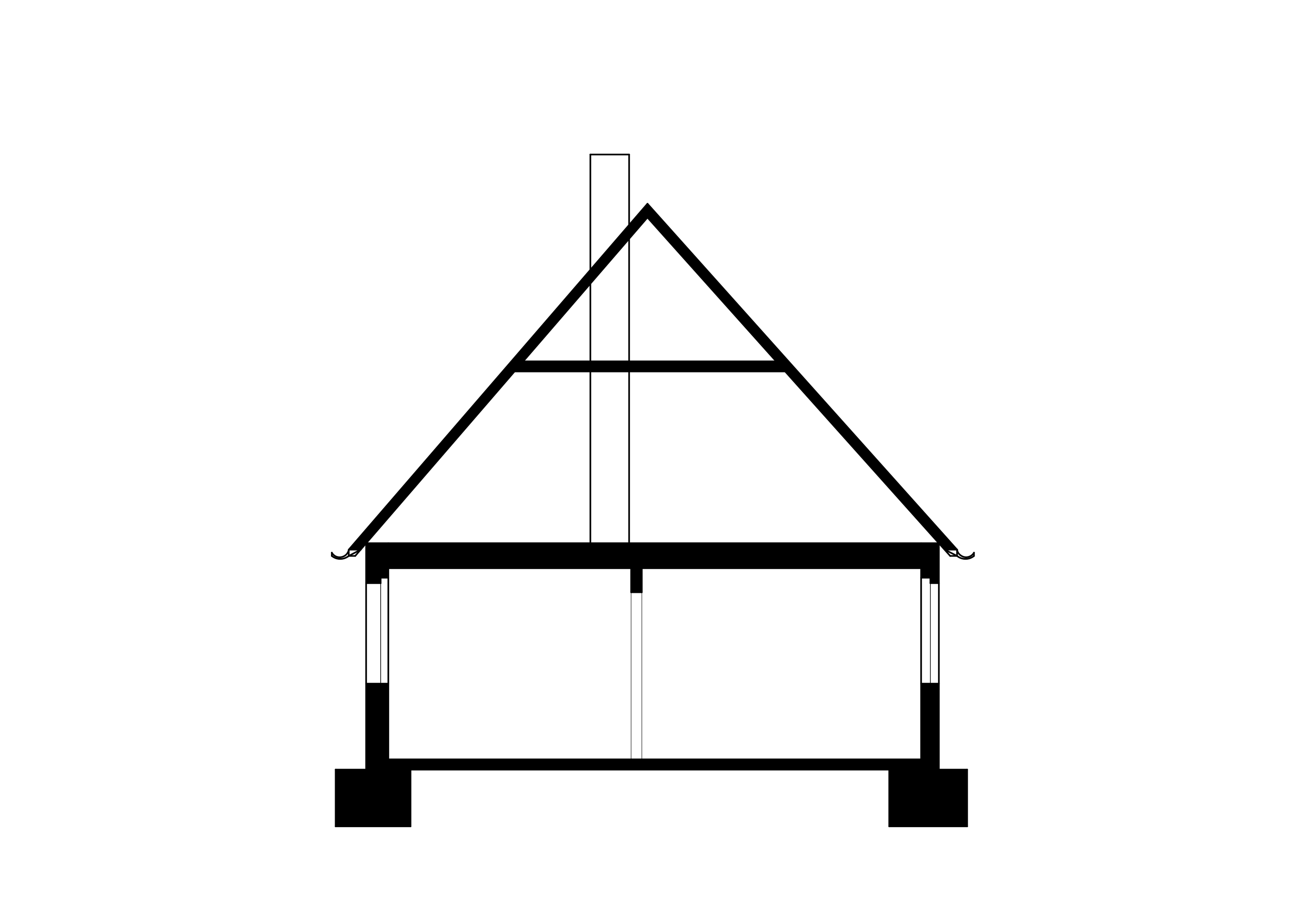 After consultation with the bank of the buyers, these documents were already sufficient for a positive financing commitment. However, the young couple wanted to show the bank additionally what they intended to do with the property. So they ordered two more sales-optimized floor plans from us.

To create the sales-optimized floor plans, they selected the dimensioned floor plans and hand-drawn what would be changed and how, when the renovation was complete. They also added to the sketch what the rooms would be called in the future and where which furniture would be located for the guests. They have also taken this as an opportunity to start working intensively on the room planning. Thus a purchase list for the furniture was already provided and also these costs planned, which are unfortunately not covered by the financing.

What specific remodeling measures were planned for the building: 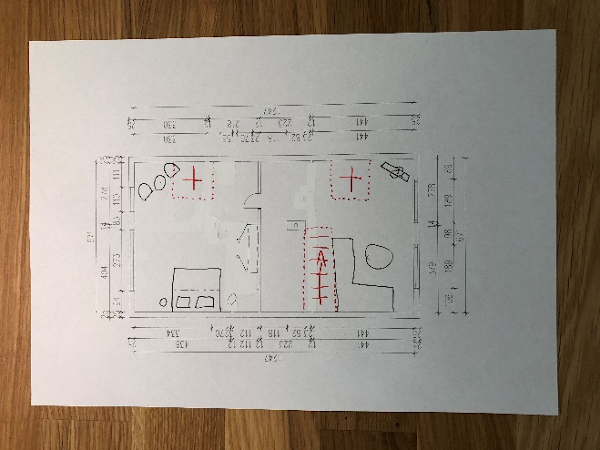 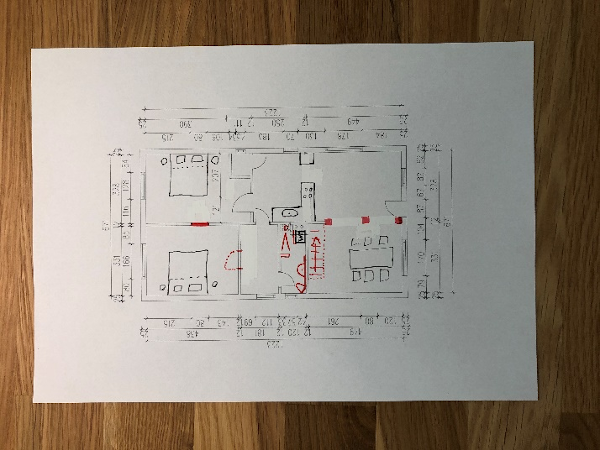 They then uploaded these two sketches back into their customer account at Grundriss Schmiede and ordered two sales-optimized floor plans. The special feature here was that the young couple also wanted to have their own design. They planned to eventually publish these floor plans on their own homepage as well as on vacation portals like Airbnb or FeWo. So before placing the order, they again spoke briefly on the phone with the employees of Grundriss Schmiede, so that a coherent color concept for the floor plan and the furniture was determined together. 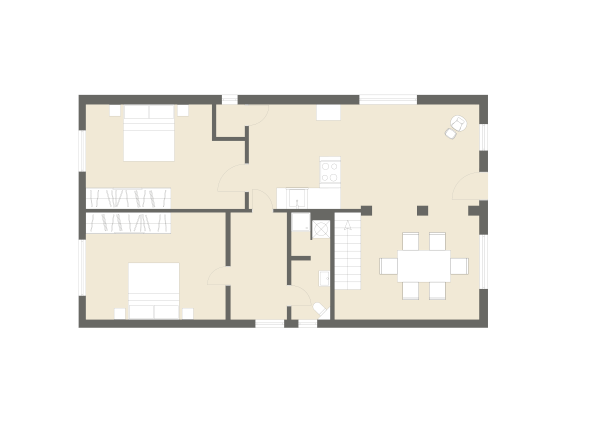 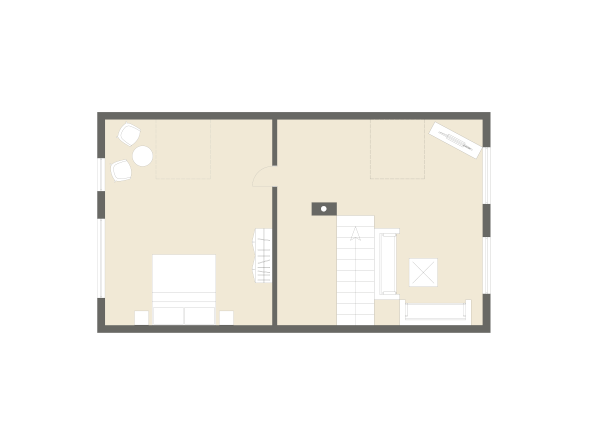 They then submitted all this documentation to the bank and received a financing commitment at a very good interest rate without any further inquiries about the documents!

The preparation of the documents has cost the young couple all in all no 400 €, which meant that the entire investment of the two in this object was in the range of what they were willing to pay. Below we have broken down the total costs once again in a clear manner:

Currently, the renovation of the honorable, 135-year-old house is in full swing. For data protection reasons, some property-related data has been slightly changed.

If you would also like to write your personal success story with us, please feel free to contact us at any time by e-mail E-Mail or simply give us a call. 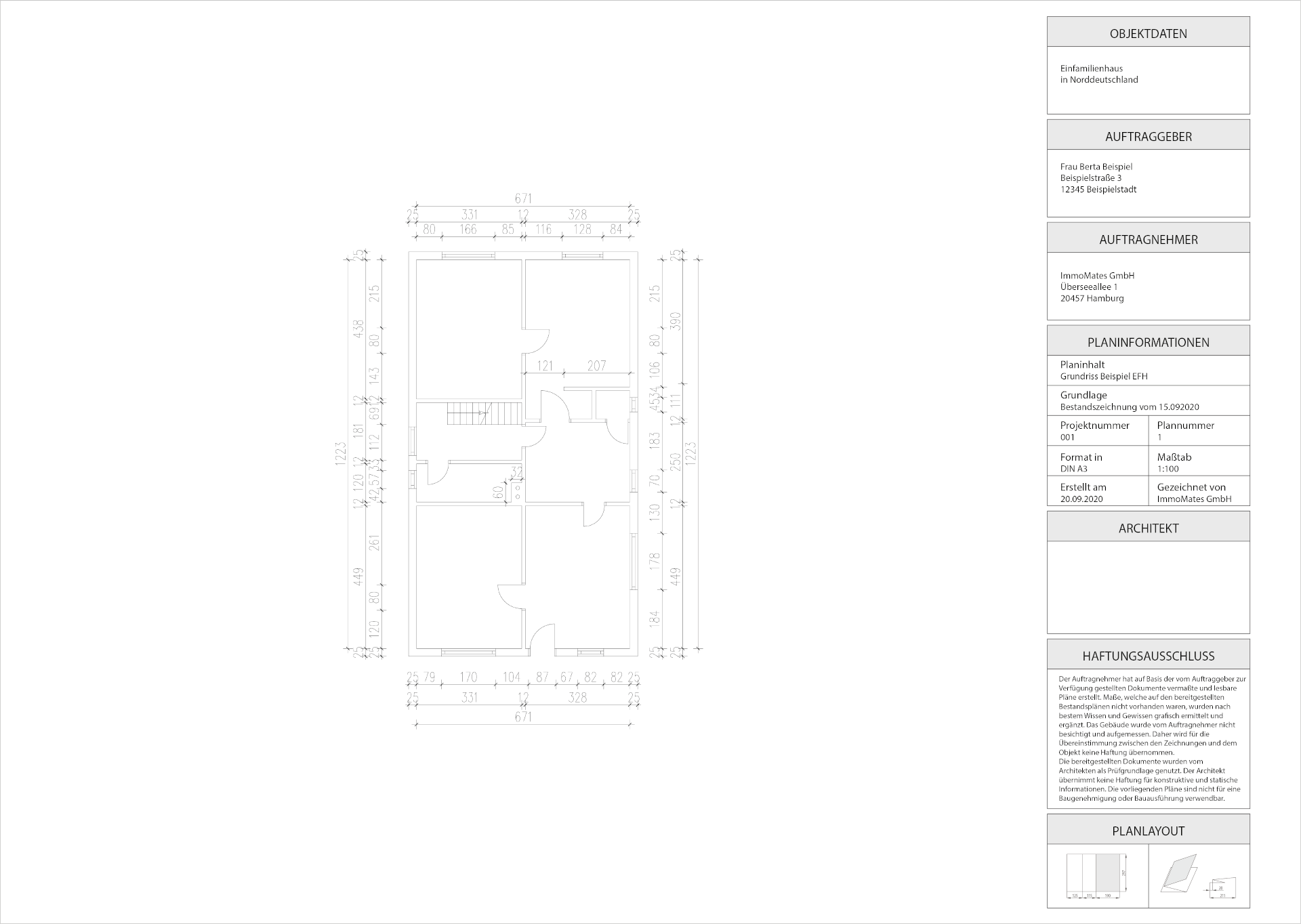 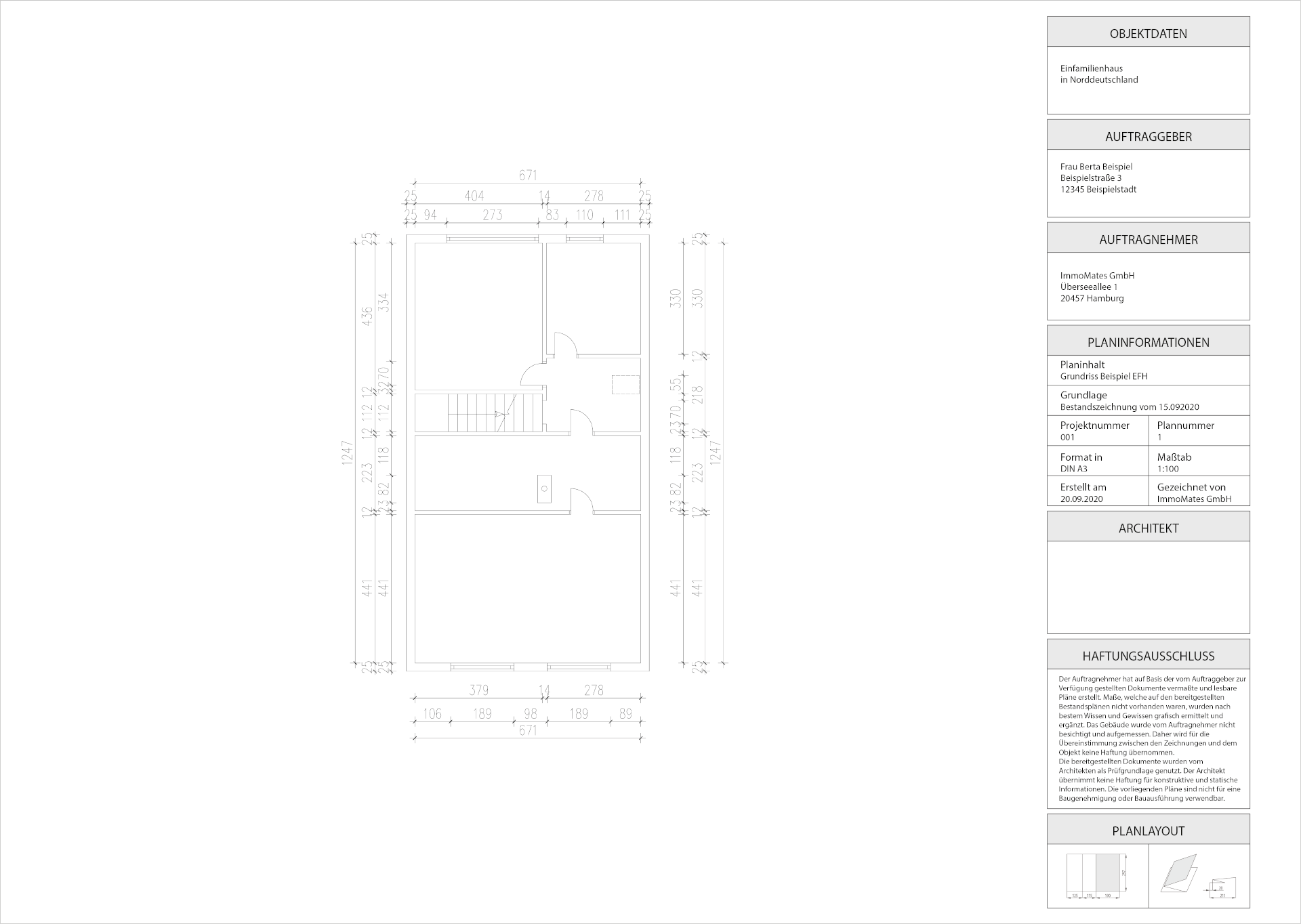